This two-leg dog is called FAITH, born on the eve of Christmas in 2002. He could only crawl on the ground when he was born. Even his mother looked down on his deficiency and tried to kill him.

The original owner did not think Faith stood a chance of growing up. The Strongefellow family decided to adopt it to give it a chance by teaching him to ‘walk’. The name ‘Faith’ was given to him to bless him with hope and determination.

It only took 6 months for miracle to happen.

They first put Faith on a roller board to let him experience the sensation of movement. Then they started to tempt him to stand up and leap by using a spoon of peanut butter jelly as bait in front of him. The other dog at home also forced Faith to move. Faith slowly picked up the trick of balancing himself on two legs and leaping along. With more training in the snow, Faith was finally able to walk like a human being.

Faith enjoys running around, and is the center of attention wherever he goes. He becomes well known around the world, and has appeared in various TV shows and news programs. His book ‘With a little Faith’ was published. He was also once considered to act in a Harry Potter’s ‘The challenge of the Grail’.

Faith’s owner Jude Strongfellow has resigned from her teaching career so she can dedicate to taking Faith on a round-the-world entourage, to showcase to the world that one can have a perfect soul without a perfect body.

Always remember; Life often plays some cards contrary to what we wish for. But we can change our perspective to lift our life and shine.

Let’s learn to be THANKFUL for every day and live life to the fullest! 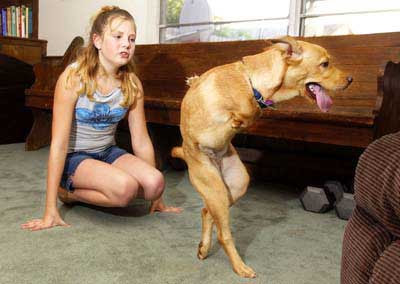