Is This Doll Really Evil ?

This creepy looking doll was found by a tree in Singapore and according to locals, it is cursed.


This is how the doll was found. By herself, next to a tree. 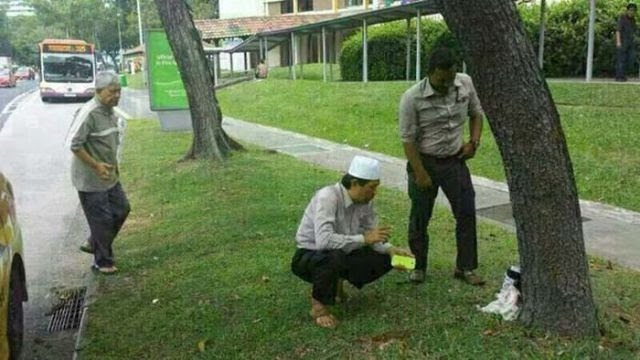 She had her eyes covered… Seeing what was under the blindfold is a little more than creepy.

According to the person who posted the pictures online:
The doll was found beside a busy street in Singapore. The Arabic word on the cloth is translated as “bismillah.” (I think it’s to trap whatever jinn or curse is inside from coming out or following the owner back home. Others speculate it’s a product of black magic.)
Stories from Twitter revealed the following:
That the doll is possessed and has been moving around on its own when the original owner isn’t home. She bound the eyes and left it far away from home so it wouldn’t follow her back.Some say the doll could be heard talking when it’s left alone in a room and is found with its head turned in a different direction. People heard it speak in the Malay language and sound like an adult female.
The original owner found that the only way to get rid of it and make sure it won’t come back is to cover its eyes. The curse is rumored to have passed on to someone else who found it and untied the cloth unknowingly.
The doll has been missing since being discovered.
On the very day the locals found it, there was a freaky suicide (guy hanging beside an apartment block) and murder case, which could be coincidence.
Source ; www.izismile.com
Publié par MisS SsbbW à 20:06